Although usually undetectable to the naked eye, mycotoxins present a very real danger to the humans and horses exposed to them. The scale of harm varies from mild (e.g. a cough, skin irritation or weight loss) through to severe behavioural or health symptoms (e.g. grass-affected behaviour, organ damage, colic), economic losses through infertility and may even be life-threatening.

Mycotoxins are harmful substances produced by the naturally occurring bacteria and fungi that grow on forage and grains.  They can be present in pastures and grains pre- and post- harvest, or may build up if unprocessed grains or manufactured feeds are not well stored.

In most cases, humans are unable to see, smell or taste mycotoxins or the organisms that produce them. Laboratory tests and microscopes are required to detect and identify mycotoxins in horse feeds.

Some common pasture plants have evolved with fungal endophytes in a symbiotic (mutually beneficial) relationship. The plant uses the fungus as a kind of defense mechanism to repel grazing animals. The endophyte (often an ergot-producing fungi – see below) gains shelter and nutrients from the plant and in return produces alkaloid chemicals which taste bitter and are toxic to livestock, allowing for more plant seeds to survive and grow. Unfortunately, the alkaloid mycotoxins produced by some endophyte fungi cause health problems for the animals (including horses and humans) who consume them.

To date around 400 mycotoxins have been reported by scientists. Mycotoxins known to impact on livestock health are described in Table 1. 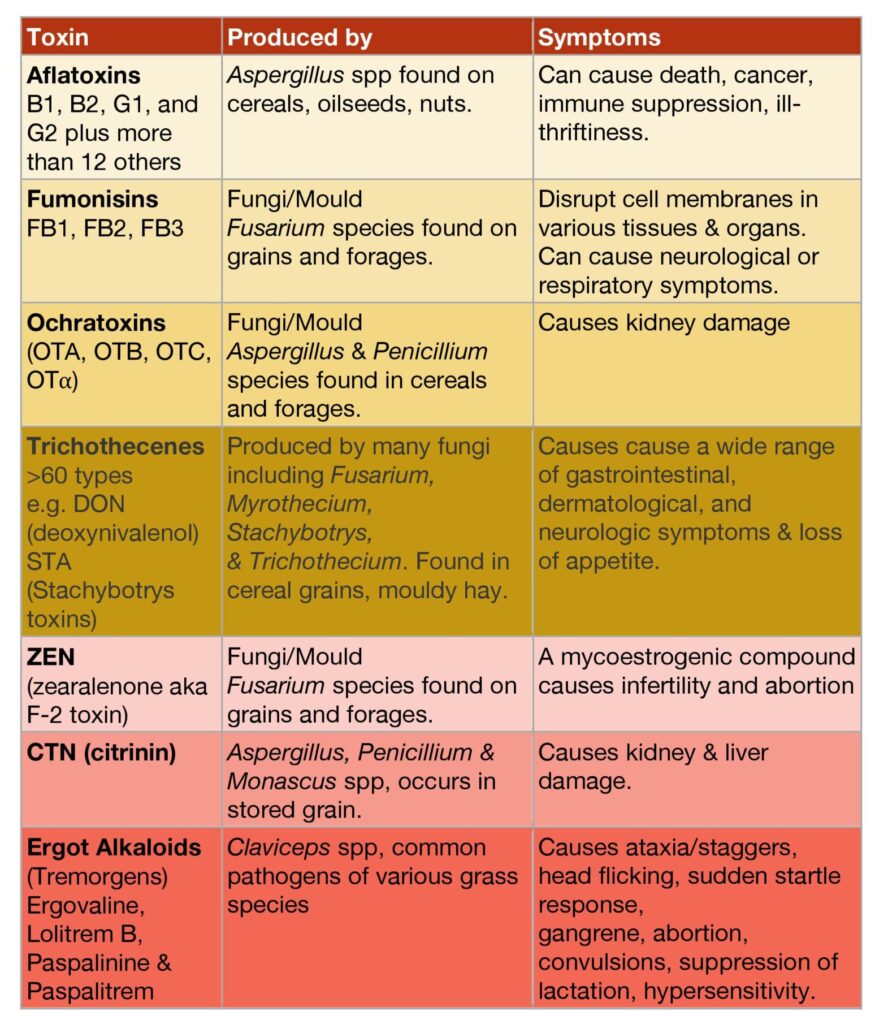 Some grass varieties are susceptible to carrying fungi that produce toxic substances such as ergot fungi which produce the tremorgenic toxins that cause staggers. Ergot fungi are pathogens of cereal grains and other wild and cultivated grasses. They attack the grass flower’s ovaries and produce a dark coloured spore storage body called an ergot in place of the developing seed. The ergot releases a sticky substance called honeydew which contains millions of fungal spores. Honeydew attracts insects who then spread the fungi to other grass plants. Ergots and honeydew make ergot fungi one of the few mycotoxin-producing species that are visible to the naked eye in pasture and grain crops.

Paspalum staggers is caused by fungi from the genus Claviceps that can grow on the seeds of paspalum, ryegrass, phalaris and cereal plants. The presence of these ergot fungi is often noticeable by a sticky honeydew on the grass flowers. Ergot from these species contain a number of toxins including the neurotoxins paspalitrems A and B considered responsible for causing paspalum staggers in horses. The symptoms are similar to ryegrass staggers. Anecdotal evidence supports the use of mycotoxin binders in successful management of mud-fever and photosensitivity in horses grazing ryegrass and paspalum.

Aflatoxins are a mycotoxin produced by the fungus of the species Aspergillus. These toxins can accumulate in stored feeds, grains and feed additives when feed has been stored in damp conditions with the high humidity and warm temperatures that promote fungal growth. Processed feeds or cracked grains are more at risk than whole grains because the fungus can not penetrate intact grain.

Avoid the risk of aflatoxin contamination by only feeding grains and feeds that have been well stored and discard any damp, stained or smelly feed.

A rare but serious cause of feed-related illness in horses is botulism caused by the spores of the bacterium Clostridium botulinum. According to vets at UC Davis in California, most cases of botulism in adult horses result from ingesting pre-formed botulism neurotoxin in wet or spoiled forages or in hay, haylage, or lucerne cubes which have been contaminated by an animal carcass.

Click here to find out about an Australian made toxin binder that combines 5 key ingredients to provide broad-spectrum protection against the risk of mycotoxins: Farmalogic Grazaid.

Tags:
grass affected, mycotoxin
Newer The Essential 4-Step Guide to Safe Weight Gain for Horses
Back to list
Older Are You Wasting Money on Vitamins for your Horse?

Subscribe today to receive the latest news, discount offers and more from Farmalogic.

Subscribe to our VIP club and receive discount offers & more from Farmalogic.

Sidebar
Start typing to see products you are looking for.

Use the coupon code TRYUS10 to receive a 10% discount on your first purchase. T&Cs apply. Dismiss