Prebiotics and Probiotics in Equine Nutrition

The billions of tiny microbes inside the digestive tracts of humans, pets and production animals are gaining widespread recognition from scientists, doctors and the general public for the health benefits they provide. This ‘microbiome’ of tiny living organisms within the gastro-intestinal tract is being studied to a new and exciting level of detail as scientists explore the links between diet, gut microbes, digestion, disease, behaviour and the brain.

Prebiotics are “a substrate that is selectively utilised by host microorganisms conferring a health benefit.” (ISAPP, 2017).

Prebiotics include indigestible sugars and carbohydrates, fermentation products (such as MOS and brewer’s yeast) or indigestible plant fibres and carbohydrates (such as lignin and cellulose) that nourish the existing gut microbial population. When gut microbes ferment prebiotics they produce volatile fatty acids (VFAs) including butyric acid and propionic acid which can be ingested by means of receptors in the intestinal wall and then be absorbed and used by the horse.

As horse owners most of us are very conscious of the impact that changes in diet can have on our horse’s energy levels and behavior. We are also becoming increasingly aware of the role that probiotics can play in the gut health of our horses.

Probiotics are “live microorganisms that, when administered in adequate amounts, confer a health benefit on the host.” (FAOIWHO, 2001).

Some well known examples of probiotics used in the horse industry include the live yeast Saccharomyces cerevisiae and the bacterial species Lactobacilli, Bifidobacterium and Enterococcus. 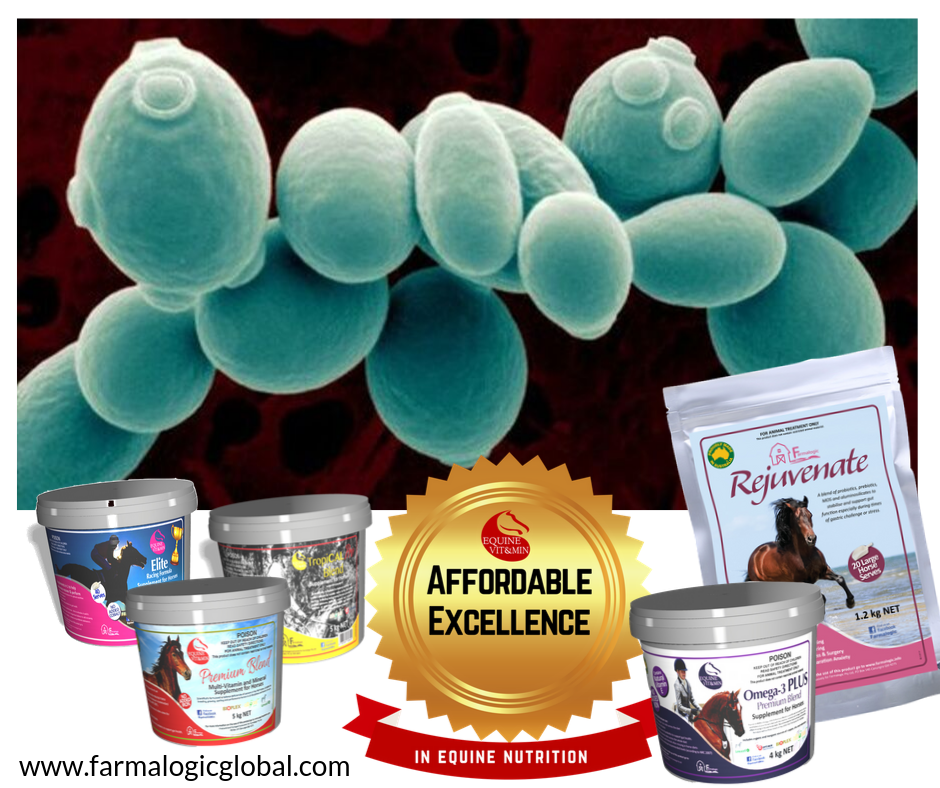 WHY ARE GUT MICROBES SO IMPORTANT?

The horse’s digestive tract has evolved in synergistic collaboration with a huge population of microbes of many species to their mutual benefit. Most horse owners have heard of the need to nurture the horse’s hind gut microbial population, but there are also beneficial microbes the entire length of the digestive tract.

Microbes present in saliva produce lactate which helps maintain the acid content in the stomach to the level necessary for digestion and internal food hygiene. The microbial population of the stomach lining and food mat inside the stomach is equal to or greater than the total microbial population of the hindgut and is predominantly represented by two bacterial species, Lactobacilli and Streptococci. These bacteria play an important role in starch digestion.

The horse’s small intestine (all 25 metres of it!) is host to large numbers of anaerobic bacteria whose main function is to digest starch and utilize the lactate that is produced during starch fermentation. Much chemical and enzyme-assisted digestion and absorption of nutrients also takes place in the small intestine.

The hindgut, composed of the cecum and colon, holds over 60 per cent of the total gut volume of the horse. It is home to a very diverse population of microbes, giving horses the title of “hindgut fermenters” in the animal world along with elephants and rhinoceros. The hindgut microbes of the horse are predominantly bacteria but also include protozoa, fungi, archaebacteria and phages, with many species unidentified at this point in time.

The hindgut contains bacteria that live off the indigestible portion of plant fibre, producing volatile fatty acids (VFAs) and gas. The horse, unable to digest lignin and cellulose from plant cell walls, is able to utilize many of the VFAs produced by microbial fermentation as an energy source. Horses also absorb B-group vitamins, protein and nitrogen of microbial origin in the hindgut. In this way the bacteria help horses obtain more nutrition from the forage they consume, effectively increasing forage digestibility.

The hindgut also contains bacteria that metabolise starch and sugars but the main VFA these bacteria produce is lactate, a large molecule with poor uptake by the horse. Feeding horses large meals high in starch, especially uncooked grains such as barley and corn that are not well absorbed in the small intestine, can lead to high production of lactate and a lower than normal pH (acidic) hindgut.

Hind gut acidosis can damage the colon wall causing pain and may also lead to dehydration and colic. When given time to adapt to a high lactate environment, the hindgut microbial population of lactate-utilizing species increases and the population of fibre-fermenting microbes declines.

WHEN SHOULD I USE PRE & PROBIOTICS?

Medical research exploring the human gut-brain axis is finding links between gut microbial populations, stress and disease. Manipulation of microbial populations through management of diet, probiotic therapy and use of prebiotics is leading to exciting breakthroughs for some people suffering depression and irritable bowel disease. Scientific evidence to support these benefits is limited due to lack of research funding but it is reasonable to speculate that research into horses with their huge microbiome will eventually measure the benefits from feeding pre and probiotics.

WHAT DOES CURRENT RESEARCH TELL US?

Diet affects the relative populations of different species of microbes in the gut whether the host is horse, human or laboratory mice. Nutritionists recommend introducing new feeds gradually over a 10 – 14 day period to allow time for gut microbial populations to adjust and avoid sudden changes in gut pH.

Stress induces increased gut permeability allowing bacteria and bacterial antigens to cross the gut lining and activate an immune response leading to inflammation in the gut that affects the balance of gut microbial species.

Within the human GI tract, the mutually beneficial relationship between the microbiota and the host maintains normal immune function and barrier integrity of the gut lining, keeps food moving through the tract normally, and influences nutrient absorption. Disruption of this relationship alters gut function and increases susceptibility to disease.

Animals treated with the probiotic Lactobacillus rhamnosus over 28 days had lower levels of corticosterone (a hormone released during stress) and reduced depressive behaviours.

In chickens, the VFAs butyric acid and propionic acid produced by fermentation of fibre give positive signals to hormone-producing cells in the intestinal wall to produce natural hormones which are necessary for the maintenance of the intestinal system and for the feeling of being ‘full’ after eating (satiety).

Feeding horses a specific strain of live yeast probiotics reduced the impact of transport stress and high concentrate diets on microbial populations and may even reduce the stress experienced during transportation.

Feeding horses live yeast probiotics maintains the natural diversity of hindgut bacterial populations. Live yeast compete for nutrients with undesirable bacteria in the gut, scavenge oxygen and produce amino acids and B-group vitamins that may stimulate the growth of beneficial bacteria within the hind gut.

Research in humans demonstrates that gut microbial diversity is beneficial to the health of the host (human).

Beta glucans which can be found in yeast cell walls, algae, seaweed and rice bran can stimulate the immune system to fight disease while acting as an anti-inflammatory agent.

Scientists have consistent evidence that specific strains of live yeast probiotics fed to horses can:

When the populations of starch fermenting bacteria increase in the equine hindgut, increased lactate levels may cause dehydration and the contents of the colon become dryer increasing the risk factor for colonic impaction (colic).

We see, hear and read lots of anecdotal evidence that probiotics lead to calmer, more stable horse behaviour, especially during times of stress. Horses seem better able to ‘cope’ with stimuli that previously caused problems. Probiotics contribute to less acidic, less watery manure during transport which means a happier horse at a competition, with cleaner legs and tail (making happier riders and strappers!).

Basing a horse’s diet on plenty of roughage and minimizing use of high starch and high sugar concentrate feeds is an essential starting point for nurturing the horse’s gut microbiome and supporting gut health. Use of a probiotic to support the gut microbial population is worthwhile especially before, during and after times of stress, and best results are obtained by adding a quality supplement to provide adequate levels of a suite of B-group vitamins. Thiamin (vitamin B1), riboflavin (B2) and other B group vitamins are critical for horses to utilize the energy supplied by the diet. These vitamins are often produced and used by bacteria in the hindgut. Cobalt is often included in horse supplements but interestingly it is the gut microbes that use most of the cobalt, not the horse itself.

Researchers are hopeful that humans may benefit in future from use of therapeutic agents targeting the gut microflora to treat stress-related psychiatric and gastrointestinal disorders. In a review on the regulation of the stress response by the gut microbiota across various species, scientists concluded that “there is accumulating evidence that certain probiotics are capable of decreasing the behavioural and endocrine components of stress.”

As scientific knowledge into the effects of gut microbes on their hosts advances in many host species, the future looks bright for better dietary understanding and use probiotics to impact positively on our equine friends.

Collins, S.M. & Premsyl, B. (2009) The Relationship Between Intestinal Microbiota and the Central Nervous System in Normal Gastrointestinal Function and Disease Gastroenterology, Volume 136, Issue 6, May 2009: 2003-2014.

Moreton, H. (2004) The effect of Saccharomyces cerevisiae I-1077 on weight gain in yearling ponies. In: LAN Internal report.

Subscribe today to receive the latest news, discount offers and more from Farmalogic.

close
Start typing to see products you are looking for.